This month, A.R.M visited an exhibition at the art gallery of one of the oldest universities in Europe. Biotope, by the Portuguese artist João Tabarra, curated by Nicole Brenez, will be on display until the 22th of January 2016, at the College of Arts of the University of Coimbra, in Portugal.

First and foremost, it is important to note that this exhibition represents the second part of a project[1] started in 2014, in which Tabarra’s work revolves around progeny, intimacy and cosmos. In this particular exhibition, the artist achieves a sense of connection with the earlier work, as he once again resorts to photography and to video installation, currently to materialize his concerns about extinction and birth. In Biotope, the works can be seen as a personal reflection on the human condition and on animalism. This is conveyed through the frequent use the artist makes of himself and of real and taxidermied animals as subjects in his work.

The quietude observed in each photograph can, in a way, be misleading, as reveals the desire to break and reinvent the primary gestures, the tools of men and the way they shape the world – sometimes irreversibly – causing the annihilation of species. Tabarra’s work can be seen mostly through large format photography, but the sense of movement makes us wonder if there is a script – as in a movie or documentary – hidden somewhere.

One of a kind, the opening of the exhibition was preceded by Biotope’s book presentation (published by Abysmo), and a series of lectures by Nicole Brenez, Pascale Cassagnau, Élisabeth de Fontenay, and Stepháne Bou.

[1] This exhibition was named Discrépant and took place in 2014 at Filomena Soares Gallery, in Lisbon, Portugal.

by: Pedro I. Rodrigues 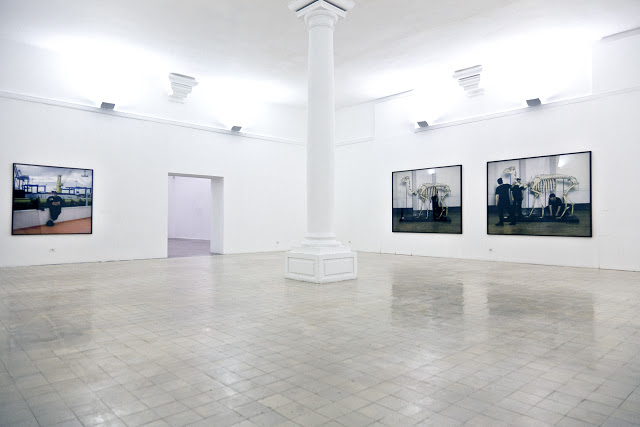