Hauser & Wirth Somerset is delighted to present ‘Rashid Johnson. Stranger’, following the artist’s two-month long residency at the gallery. Johnson employs a wide range of materials and images to explore themes of art history, literature, philosophy, and personal and cultural identity. His exhibition at Hauser & Wirth Somerset unfolds throughout the entire gallery, with a combination of painting, sculpture, installation, and drawing, all completed during his residency.

The exhibition takes its title from an essay ‘Stranger in the Village’ by James Baldwin. Originally published in Harper’s Magazine in 1953, it is the account of Baldwin’s experiences as a young African-American man, living in a small village in Switzerland.

The first room of the exhibition is occupied by a sculptural installation. Blackened steel cubes recall the minimal, conceptually-driven works of Sol LeWitt; here, this familiar framework is occupied by diverse elements contained within. A development from Johnson’s previous architectural grids, the work is immersive, inviting the viewer to walk around and amongst the stacked materials, including plants in ceramic pots made by the artist, shea butter, parachutes, as well as a selection of books, which include Albert Camus’ ‘The Stranger’, ‘The Sellout’ by Paul Beatty and ‘The Crisis of the Negro Intellectual’ by Harold Cruse.

Much of this exhibition explores themes of escape, and of being a stranger or outsider. In the Threshing Barn the plants have all been sourced locally but bear no connection to their rural location; tropical palms vie for space with yuccas and cacti, spilling out into the courtyard beyond and conjuring images of distant and tropical lands. Crumpled parachutes hint at the idea of leaping into the unknown.

A meta-narrative also exists within the work; the parachutes reference a mysterious man, known as DB Cooper, who hijacked a Northwest Airlines flight in 1971, extorted $200,000 and parachuted to an uncertain fate. Numerous theories as to his whereabouts, and whether he even survived, have been proposed over the years, but the mystery has never been solved.

In the second gallery, the maximal, immersive quality of the first gallery is turned on its head with a reduced, elegant presentation of four new drawings. Closely related to his ‘Untitled Anxious Audience’ paintings that debuted last year in New York, these new ‘Untitled Anxious Drawings’ explore the theme of anxiety that runs throughout the artist’s practice. Each drawing presents a grid of rudimentary faces rendered in black oilstick on cotton rag. The frenetic motion of Johnson’s hand emphasizes the titular anxiety of the characters depicted, their eyes rapidly drawn spirals, their mouths zig-zagged slashes.

In 2015 the artist presented the critically admired exhibition ‘Rashid Johnson. Anxious Men’ at the Drawing Center in New York, featuring small-scale black-soap-and-wax-on-tile portraits that are clear precursors to the drawings on view in Bruton. Johnson has described this series as a response to the current global social and political climate, and the challenge that people worldwide face in navigating and negotiating their own positions therein.

In the next room, the theme of anxiety is explored further in the work ‘Untitled Clowns’. The use of clowns in the title is a reference to jazz musician Charles Mingus’s ‘The Clown’; spoken word set to music, it tells the dark story of a clown so desperate to make his audience laugh that he ends up blowing his brains out. In this work, grimacing, sinister faces are drawn in black soap and wax across planes of gridded white ceramic tile. While the ‘Anxious Audience’ was created during a time of political uncertainty (just before the US election), Johnson developed the ‘Untitled Clowns’ shortly after the presidential inauguration. These characters are more complex in nature, their faces, at once horrifying and horrified, are reflective of a collective mood. On the far wall of the gallery, the word ‘Run’ is depicted in neon.

Rashid Johnson’s materials are rich in symbolism; shea butter is a fat extracted from the nut of the African shea tree, and black soap is made from the ash of locally harvested plants and barks such as plantain, cocoa pods, palm tree leaves, and shea tree bark. Both are traditionally highly valued as healing, medicinal products of West Africa, and today can be found in many commonplace beauty products worldwide. Black soap is not only deployed within many of the works; it has also been placed in the gallery’s lavatories, in place of the usual hand soap.

The artist’s use of Afrocentric materials comes at first from his personal experience; he was raised in the suburbs of Chicago, where these substances were regularly used in the family home. Johnson is interested in how these products, such as shea butter, have been used by African-Americans to connect with an idea of Africanness. Whilst he does have an engagement with these materials on the level of what he refers to as ‘cultural signifiers’, he views their employment in his work as simultaneously closely aligned to modernist influences, when artists such as Pablo Picasso and Georges Braque explored the aesthetics of African art.

The Rhoades gallery contains large panels collaged with diamond-shaped vinyl wallpaper depicting images of palm trees and African masks. Layer upon layer of found imagery has been embellished with spray paint and daubs of melted black oil stick. Johnson sees the collages as ‘collisions’, explorations of abstraction where each individual component retains its identity, colliding with the other elements, rather than melding together to create a new image. These works explore the idea of mask-making both representatively, with overt references to African masks, and also in an abstract sense, with multi-layered imagery, masking what lies beneath.

The theme of escape reaches a climax in the final room, with the works ‘Untitled Beach Collages’. As a child in Chicago, Johnson has recalled the image of a palm tree invited daydreams about success and manhood. He would conjure images of tropical vistas, linking these paradisiacal lands with success, opportunity and aspiration. For an artist whose work has historically employed colour only sparingly, these new paintings are exuberantly colourful, representing a major push into new, rich territory in his work. 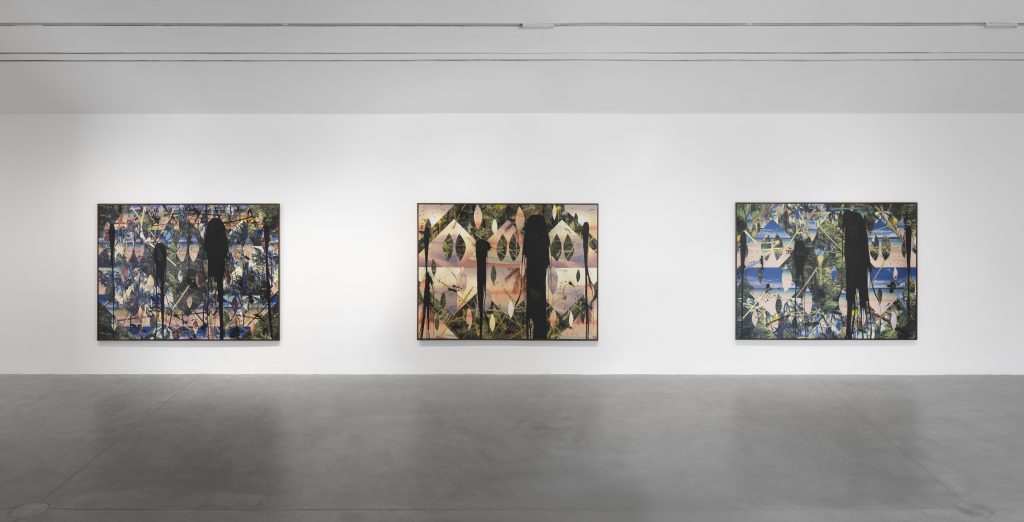