‘The inhabitants of Loos’ houses are both actors in and spectators of the family scene – involved in, yet detached from, their own space. The classical distinction between inside and outside, private and public, object and subject, becomes convoluted.’ 1

In her 1992 essay ‘The Split Wall: Domestic Voyeurism’ Beatriz Colomina analyzes the interiors of Adolf Loos. Treating architecture as a system of cultural representation, such as film or TV are, Colomina explores mechanisms of comfort, achieved through simultaneous intimacy and control, the (predominantly) male gaze, the inversion and detachment of inside and outside, the arrested movements of visitors by conspicuously placed furniture, gender distinct design as well as the concept of the ‘theater box’ as a design tool.

Remarkably Colomina deduces many of her assessments from the photographic documentation of these projects. Colomina notes that many of the photographs ‘tend to give the impression that someone is just about to enter the room, that a piece of domestic drama is about to be enacted. The characters absent from the stage, from the scenery and from its props’.

Klará Hosnedlová seizes this opportunity and boldly introduces a character of her own making onto this stage.

Act 1. Vienna, Graben 13, or to be more precise Knize, a tailor specialized in made to measure menswear and toiletry for more than 150 years, former imperial and royal court purveyor as well as proud owner of an interior refurbished by Adolf Loos in 1913. We are only allowed a glimpse into Pearl’s venture – controlled views, cropped scenes, covert glances – but we are made to feel that Pearl has not only inhabited the spaces offered by Loos but she has appropriated and translated them into shapes, styles and techniques of her own.

Act 2. Vienna, Burggase 24, Knize’s Loos interior has been awoken from hibernation and has blossomed into a metamodern collage turned space, full of contemporary signifiers enquiring about feminine or feminist modes of expression, gender fluidity, ornamentation, correct clothing, the relationship between fine arts and craftsmanship as well as the intricacies of preservation.

Those who have read Loos more closely might be tempted to point out the opposite nature of Hosnedlová’s project and rightfully so, but they will also have to admit to Loos’ own constant contradictions and inconsistencies which makes their coalescence the more gratifying.

Sonia Leimer’s P Corner operates in a similarly transhistorical fashion. Originally conceived as a moulding to cast the corner of a typical Viennese house in order to create a concrete copy for a collector’s garden in the 13th district, it embodies a variety of epochs represented through elements found on a surface of barely two square meters. Marble cladding, a corner guard, the power box, each with their creases, protrusions and symbols merge into a pattern of almost textile quality in form of pink silicone, enhanced to a sculpture by a rough support structure made of wood and plaster. Its placement in space emphasizes the qualities of a corner as something that excludes and accommodates concurrently while always demanding a change in direction in order to truly perceive it.

Just around the corner.

From all corners of the earth.

From the corner of the eye.

Paint yourself into a corner.

And Act 3?  It is for you to write. And who knows, maybe Pearl is also here? 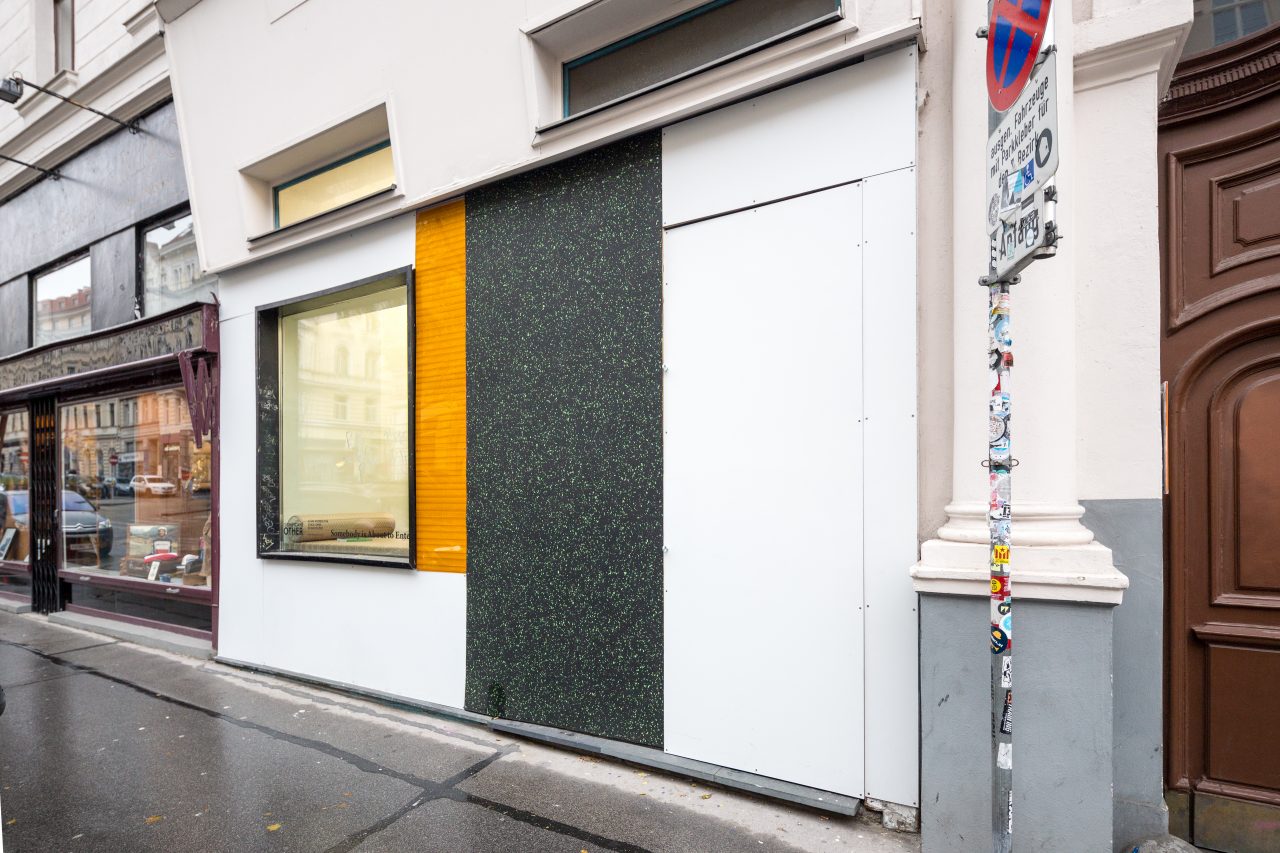